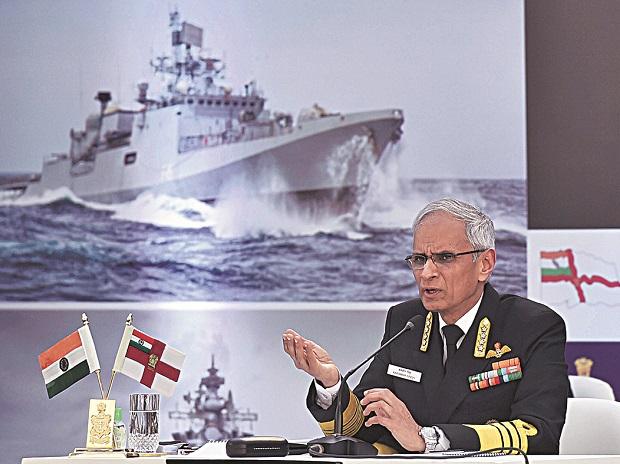 Navy Chief Admiral Karambir Singh has revealed that the navy is also playing a role in the ongoing Sino-India troop confrontation in Ladakh, with its surveillance aircraft obtaining intelligence for the army.


Addressing the media in Delhi on Thursday, on the eve of Navy Day, Singh said the navy was prepared to face the “dual challenge from Covid-19 and Chinese attempts to change the Line of Actual Control”.

He said the navy’s two Sea Guardian drones, taken on lease last month from the US, along with its Boeing P-8I multi-mission aircraft and Heron drones were operating in the border areas of Eastern Ladakh.


Singh was emphatic about the navy requiring a third aircraft carrier, although Chief of Defence Staff General Bipin Rawat earlier questioned the need to spend a large sum — estimated at about Rs 50,000 crore, inclusive of the carrier’s air complement — on a single warship. The Indian Air Force (IAF), too, opposes a third aircraft carrier, arguing that it can provide air support more effectively from ashore.


“Navies are all about reach and sustenance. For an aspirational country like India, which wants to become a $5-trillion economy, you have to be able to (project power) outwards. We cannot be a navy that is tethered to the shore,” he said.


He also revealed that the MiG-29K/KUB fighters, which operate from the navy’s lone aircraft carrier INS Vikramaditya, and which will also fly from INS Vikrant — the second carrier that will commence sea trials next year — would be replaced thereafter by the new Multi-Role Carrier Based Fighter (MRCBF).


“We have the MiG-29 presently operating from INS Vikramaditya, and they will also operate from the Vikrant and the Indigenous Aircraft Carrier. Meanwhile, to replace the MiG-29, we have taken up a case for the MRCBF, which we are trying to procure along with the air force.”


That means the MRCBF acquisition is being added to the IAF’s separate procurement of 114 medium fighters.


In an indication that the Defence R&D Organisation (DRDO) is putting up an indigenous rival to the MRCBF, Singh said: “A new development has been the Twin Engine Deck Based Fighter (TEDBF), which the DRDO has offered us. If that happens, we will have an indigenous deck-based fighter for the navy.”


Arguing that the DRDO fighter would come too late to be an alternative to the MRCBF, the chief said: “My hope is that the TEDBF would be able to enter service in the early 2030s.”


“The NUH is being taken up under the ‘strategic partner’ (SP) model. That is intended to encourage the private industries to come up and to avoid DPSU monopolies. As a navy, we are focusing on ensuring that the SP model for the NUH succeeds.”


The defence ministry has accorded the acceptance of necessity for the NUH, he said. Next is shortlisting of Indian and foreign partners, when it will become clear whether HAL is being permitted to participate.


Meanwhile, for the first time ever, the navy is looking at innovative funding models. “We have approached the Ministry of Finance with some funding models (similar to the Railway Finance Corporation). This is still under discussion and, if it comes through, we will possibly be able to provide better liquidity to (indigenous defence) shipyards,” said Singh.