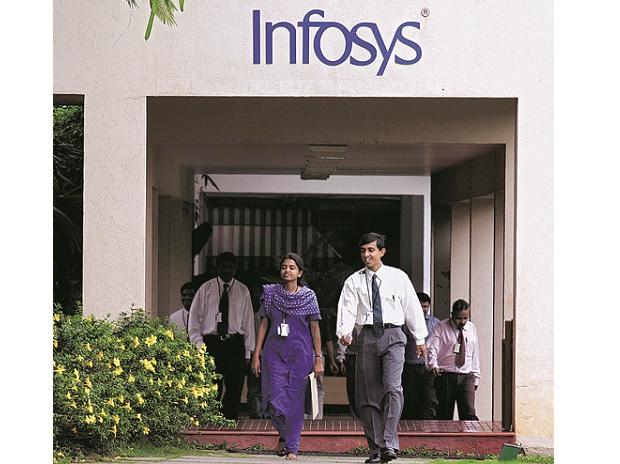 Shares of Infosys hit a fresh record high of Rs 1,185, up 4 per cent on the BSE in early morning trade on Thursday after the company reported healthy set of July-September quarter (Q2FY21) numbers on revenue and profitability front. The company has revised its FY21E revenues guidance upwards from 0-2 per cent year on year (YoY) to 2-3 per cent YoY in constant currency basis & operating margin guidance to 23-24 per cent from 21- 23 per cent.


The stock surpassed its previous high of Rs 1,165.85, touched on Tuesday, October 13, 2020. However, the stock erased its early morning gains, and had slipped 2 per cent at Rs 1,118 in intra-day trade, falling 6 per cent from day’s high level on profit booking. At 09.48 am, Infosys was trading flat, as compared to 0.07 per cent decline in the S&P BSE Sensex. In the past six months, the stock has rallied 76 per cent, against 34 per cent rise in the benchmark index.

For Q2FY21, the information technology (IT) consulting & services company’s revenues increased 3.8 per cent quarter on quarter (QoQ). The biggest surprise for Infosys, however, came from margin gain — a healthy 260-basis points (bps) improvement over the preceding quarter and 360 bps over the corresponding period in the previous financial year at 25.4 per cent. This narrowed the margin gap with industry leader TCS whose margin at the end of Q2 stood at 26.2 per cent. The large deal pipeline increased by 80.7 per cent QoQ mainly due to addition of Vanguard deal.


“Infosys has consistently outperformed Tata Consultancy Services (TCS) over the past few quarters and also narrowed the margin gap between the two companies. In addition, healthy deal wins are expected to help company in making steady improvement in financials in coming quarters,” ICICI Securities said in a note.


Motilal Oswal Securities expects some margin benefits to be sustainable (driven by automation, etc.) for Infosys. On the other hand, tailwinds (such as increased offshoring, lower attrition, deferred wage hikes, and lower travel/SGA costs) as a result of the pandemic are likely to partly wane out later on as the situation normalizes further over the next few quarters, it said.